As a thirty year old I can finally admit this without feeling embarrassed: I have mostly Indian friends. Phew. That felt good to get off my chest.

So why do I have mainly Indian friends? I grew up in Fremont, California which is not nicknamed Little India for nothing. I had essentially what are “Indian” interests, so I attended Kathak classes and participated in Bollywood dance groups, garba teams, and culture shows in college. I was also pretty seriously part of an Indian community group for the first 20 years of my life. So yeah, a combination of all that and you can see how a majority of my closest friends are Indian like me.

(I feel like I need to add a disclaimer that yes, I do have (token) non-Indian friends!)

When I give a brief synopsis of my upbringing to those that I have just met, I can see them picturing me as “that stereotypical Indian girl”. You know who I mean: the girl who choreographs all the dances for her college’s Indian club, a bit of a drama queen, and very insular/cliquey.

It is funny: we are 10 years out of college and yet these assumptions are still being made. Many times I can just see it on their faces and a few even vocalize it. A few years ago an Indian guy, after hearing about my upbringing/Indian friend group, asked me if I was “one of those Indian girls”. What does that even mean?  Is this an appropriate time to quote Mindy Kaling and say “there are literally billions of us”? Or does being able to quote The Mindy Project just add to my Indian girl stereotype? 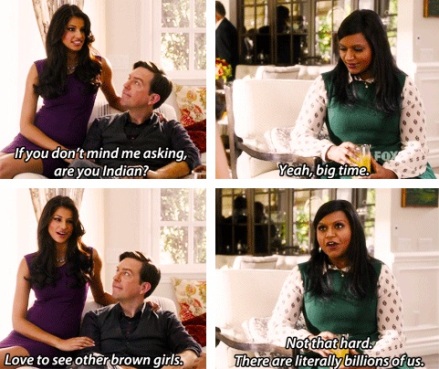 Identity is such a personal thing and how one relates to their background/ancestry is entirely up to the individual. I do have to wonder why the judgement is okay one way, but not the other.

Most recently someone told me they don’t speak their mother tongue, felt like they were a “bad Indian”, and opened up about their insecurity regarding all of this. I listened and told them that they weren’t a bad Indian because there is no such thing and that there’s no one way to be Indian. A few days later I brought up that I had started a Meetup group based on South Asian literature and the person asked, “Do you mainly hang out with Indian people?”

“Yee-sss?” I replied, unsure about how this conversation was going to go.

“Oh, well, I like to hang out with all different kinds of people,” they said. Well, I thought, that wasn’t the reaction I was hoping for but I guess this is the conversation we are having now. And so with a sigh, I began listing the reasons I shared above.

Later that night, I thought about that judgmental comment. I would never dream of making someone feel like they are a “bad Indian” nor would I make assumptions or call them “white washed”. I would never say “Oh, well, I think it is important to know your mother tongue” or essentially ask them to justify why they have the friends they have.  And yet that person can make assumptions  or comments about me? It’s ironic that someone who is insecure about their own identity felt secure enough to call me out on mine. Who named you the identity police?

Sure I know that statement says a lot about the other person than it does me. I’m no psychologist but they were probably projecting their insecurities onto me. But it still doesn’t make hearing comments like that any easier. It’s frustrating to feel like you’re being pigeon-holed and stereotyped at the age of 30. Haven’t we interacted with enough people at this point to know there is no stereotypical anything? We’re all special snowflakes in our own right.

Yes, my close friends are all Indian but they are also all kind, empathetic, friendly, welcoming, witty, independent, passionate, and extremely giving people. They’ve all done well for themselves in their careers in law, IT, tech, non-profit, and health fields. If someone were to judge me by my friends I would be worried they would assume I am as amazing and accomplished as they all are. They set the bar really high and I can only hope to have half the good qualities they do. This is why I keep them around. They help me learn and grow as a person. This is what good friends do.

In doing this mental check of all my friends, I thought about whether they would call themselves a “good Indian” or not. Actually I just texted a few of them and none said yes outright. Since they are all so brilliant and thoughtful, it led to a few text discussions about what does good mean anyway? Isn’t it all just subjective? Who sets the standard for good or bad? Society? The individual?  I don’t have any answers but it is interesting to think about.

Am I a good Indian? I’d venture to say probably not or that I am decent at best. At this point the most Indian thing about me is my insistence in making sure my one year old nephew can say foi (aka dad’s sister).

All we can do is try to live the life that we want to live. How I identify with my background may be different than how you identify with yours. That is completely okay. Let us put an end to judgments and assumptions of any kind. We’d all be better for it.

Do you feel like you are judged on how you identify with your Indian-ness? How do you react?

My love for Mindy Kaling is pretty obvious to those that know me. My brother, a recent parent, emailed me this article which discusses how The Mindy Project has been handling parenthood this season. While it was a good read, I did not find myself agreeing with the author. It made me think about the way women and parenthood are depicted on television.

Though there has been a recent trend of authentic shows, The Mindy Project strives to be anything but real. Mindy Lahiri has always been a little bit ridiculous and just out there. If Mindy and TMP wanted to portray parenthood accurately, it wouldn’t be authentic to the show itself. For a real take on parenthood, the author should be looking at dramas like Parenthood. Don’t look to a comedy show about a woman who is trying to find the Kanye to her Kim to be authentic about a lot.

Personally I found TMP’s take on parenthood to be refreshing. As someone who isn’t a mother, it was quite nice to see a woman become a parent but not let it change or consume her. Mindy is still the same person she was before she had Leo, just that she has a little human she is responsible for.

Ultimately at the end of the day people turn to television as form of escapism. I know I don’t want to watch a show about a woman that goes to work and watches Netflix at night. That is the life I live so when I turn to TV, I want something that takes me to another world.

This season of The Mindy Project has been my favorite by far. I’ve loved to see the way Mindy, who wants nothing more than to find her happily ever after, is handling her new role as a single parent. Her life has taken turns she has never imagined and while she is struggling and hurting, she is learning to overcome and come to terms with her new life. It’s still a comedy show, but there have been a few heavier moments which the show has handled impeccably.

Have you been watching The Mindy Project? What do you think about TMP’s take on parenthood?

To say I was hesitant to watch a Lifetime show is an understatement. But wherever I turned I was seeing the buzz for UnREAL, especially upon it’s renewal for a second season. Since I was in the need for a new summer show (I had been rewatching Parks and Rec, #amiproblems?), I decided to give UnREAL a REAL shot. Besides I’ve been a Shiri Appleby fan since Roswell, so I knew I had to watch for her alone.

The setting is a fictional reality show dating competition (think The Bachelor) and the characters are the cast and crew. It’s a smart look at the reality show industry. You realize how the contestants are manipulated to act certain ways that will result in the biggest drama and therefore the higher ratings. Each contestant is immediately given a persona by the production crew, ie the virgin, the villain, the single mom, and so on.

UnREAL is an eye-opening look at the brutalities of reality shows.  It’s cruel, calculating, and probably not too far-fetched to imagine that similar things happen on actual reality shows. There’s also moments of sharp humor and wit to balance out the drama.

I would say I am enjoying UnREAL so far. It’s a smart show with a gripping underlying message – reality isn’t always what it seems. Have you been watching UnREAL this summer? What are your thoughts?