This year was the year I discovered JoJo Moyes. Moyes is a British author who has penned countless romance novels.

In the span of a few months, i’ve read three of her books and I’ve enjoyed each one more than the last. I like to describe her books as “chick lit with depth”.  Her books are the perfect summer reads – you know the kind of book that you pull up on your kindle while you’re poolside sipping on a pina colada. There’s quirky characters, engaging plots, and underlying deeper message that stays with you long after you finish the book.

Me Before You tells the story of a young sheltered girl who goes to work as a nurse for a man in a wheelchair. The man, Will, is now living a semblance of the life he used to live – one that used to be life will adventure, determination, and spontaneity. Together Lou and Will teach each other about life and love. While sometimes light-hearted and comedic, the book also touches on a darker medical issue which I won’t go into because of spoilers. The book became so popular that there is now a movie in the works set to be released in 2016.

Moyes also published the sequel, After You, in September of this year. I devoured both books, but I must admit Me Before You was my favorite.

While waiting for the sequel, I read One Plus One, another Moyes book. One Plus One tells the story of a single mom living a busy, chaotic life trying to make ends meet. When her daughter becomes eligible for a scholarship at a prestigious university, the family embarks on a road trip where they meet a strange man who helps them out. What follows next is a comedic yet touching romance and look at what family really means.

If you’re looking for an easy read that still stimulates the mind, stars a strong female lead, and makes you feel the warm fuzzies, then JoJo Moyes is your go-to author.

Have you read any of Moyes’  novels? Who is your go-to author for a good read? 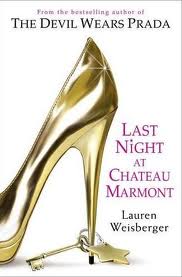 I’m a huge fan of chick lit, but I particularly enjoy reading them in the summer. They are perfect to read on the plane or on vacation because of their light and breezy nature.

I just finished reading Last Night at Chateau Marmont. It is the follow up novel by Lauren Weisberger, who wrote The Devil Wears Prada (another one of my favorites).

Last Night tells the story of a young, married couple dealing with the husband’s skyrocket into fame (he’s a singer). They are having trouble adjusting to his newfound fame and the constant travel he is doing.

I would probably rate the book at 3 out of 5. It fell flat at some times and you could predict the ending from a mile away. I did however enjoy the pop culture references (ie Chateau Marmont in West Hollywood), the peek into the glamorous life of a celebrity, and a reference to the TV show Friday Night Lights.

My chick lit must reads would be: The Confessions of a Shopaholic series (especially books 1 through 3) by Sophie Kinsella, Bergdorf Blondes by Plum Sykes, The Devil Wears Prada, and the Something Borrowed/Something Blue series by Emily Griffin.

What have you been reading this summer? What are your favorite chick lit books? I’d be interested to hear about them, as I’m always looking for good books to read!

Hope you all had a happy Monday!