Back in September, I was at a bar in San Francisco for trivia night. While ordering, a man sitting down at the bar turned to me and said, “You have really big hair” (#curlyhairproblems).  Despite this introduction I continued to make polite small talk with him while I waited for my drinks.

Eventually, predictably, he asked where I was from. Despite being born and raised in this country, this is a common question I’ve come to expect when meeting new people. My answer of being from the Bay Area did not satisfy him and so I finally told him I was born in Ohio. He was in complete disbelief and demanded to know what city. When I told him, he didn’t believe me since he hadn’t heard of the tiny town I was born in. (I wish I was kidding.)

The questions didn’t end there: Where in India were my parents from? Was it Kerala? (I think that was the one state in India he knew.) What language did I speak?

I think he would have been thoroughly confused to find out my siblings and nephew live in India.

Finally I was able to escape to sweet freedom and my friends, but I couldn’t help but be annoyed. Sure, this man may have been well-intentioned in his questions but where’s the limit? Is there one? 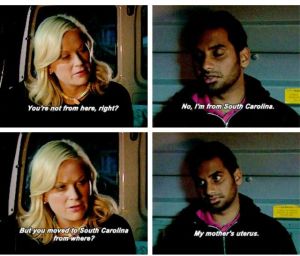 Maybe it’s the fact that I have been dealing with these questions for nearly a decade now. Whether it’s from strange people in bars to my Lyft drivers, it’s exhausting. After a certain point it gets tiresome to share your family’s entire background every time you meet someone new or when you simply want to order some food at a bar.

I know I can dismiss these comments with a joke or remark, but I hesitate doing so because I don’t want to be rude or assume what someone’s intentions are. People are curious by nature but there is a time and place for such questions, I think.

The current political climate in this country might also be causing my heightened reaction to  these questions. Every day I read the news and see something targeting women or people of my skin color that make me question my place in this country.

I’ll never forget November 8th, 2016, or how someone yelled “Go Trump” to my friends at 1 AM in San Francisco, or how I tossed and turned the whole night.

America has always been home because, well, it is literally the only home I’ve ever known. But the days after the election and even now have me wondering: am I an American? How can I be if this country elected a leader who wouldn’t think I am an American if he saw me? To him American just means white.

How can I be an American when my rights as a woman are likely in danger? Or when the rights of people who look like me and families similar to mine are in danger?

Being a child of South Asian immigrants, questioning my identity is not something new to me. But it has always been in terms of my Indian-ness. Am I Indian enough? Am I too Indian? Right when I think I have that part of me figured out I am now questioning my American side, something I have never done before.

It could be because I have solid proof (my passport) confirming me of my American identity. Or plainly because it never felt like anything I had to question. I was born in America; I am an American..it’s as simple as that right? Lately, it doesn’t feel that way.

“Where are you from?” went from being an annoying, slightly intrusive question to an uncomfortable one as I figure out my place in this new America that is unfolding itself right before  our very own eyes.