I’ve long since been a fan of Mindy Kaling, from her work as Kelly Kapoor on The Office to her recent book, Is Everyone Hanging Out Without Me. But what I’m most excited about is her newest venture, The Mindy Project, where she is the first Indian American to star AND write in her own show. That is a pretty huge deal! 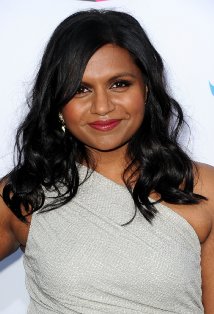 I’ve been lucky enough to grow up in an area that is tolerant, liberal, and open-minded but that doesn’t mean I didn’t get asked some inane questions like “Do you speak Indian?” or my personal favorite “No, but like where are you really from?” after I mention that I was born in the US.

Even though it premiered last night, I caught the pilot online a few weeks ago. I loved it and I found it especially refreshing that it represented Indian Americans exactly as we are: just like everyone else. No we don’t have accents nor do we have arranged marriages.

Did you see the pilot? What did you think? If you haven’t seen it yet or read her book, I highly recommend that you do!

Mindy Kaling has made it in an industry where there are so few minorities and women, which is not an easy feat.

And because this video says it better than I ever could: