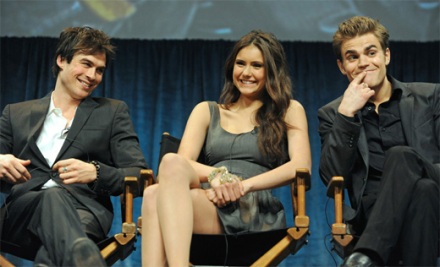 The stars of Vampire Diaries at Paley Fest 2011. (Courtesy of Google Images)

I don’t have an organized bucket list of things I want to do (I should really get on that) but there are three things I can name off the top of my head: take part in a flash mob, visit Greece, and go to PaleyFest.

(Remember, my nickname of The Walking TV Guide? Yep, my TV addiction is no joke.)

PaleyFest, which is presented by the Paley Center for Media, showcases various television shows with panels. The panels consist of the actors as well as members of the creative team, such as the writers. The event takes place over two weeks in Beverly Hills, California.

This year, some of the shows being featured are Community, Once Upon a Time, Vampire Diaries, Modern Family, and Revenge.

What I find most exciting about PaleyFest is getting the inside scoop on what is to come in these TV shows. The panels fall at an appropriate time, as most shows are currently on hiatus right now (until April..sigh) and so the juicy tidbits being dropped by the cast and crew can hold us over in the meantime.

And although I am not able to attend PaleyFest this year, I can look forward to getting the play by play updates on Twitter as well as watch the livestream. Some of the shows I’m looking forward to catching are: Vampire Diaries, Modern Family, and Revenge. PopSugar, of the Sugar Network is also posting updates on its site.