Once Upon a Time, Sundays on ABC at 8 PM 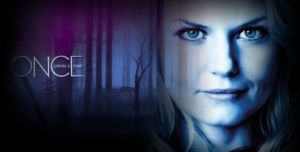 The premise: the small town of Storybrooke is occupied from characters of fairy tales, only they do not know their real identity due to a

curse casted by the Evil Queen. Snow White’s daughter, Emma Swan, is the only person who can put and end to the curse or so her biological son says. She does not believe him. The best thing about this show is how the fairy tale world and the real world are so thoughtfully woven together. It is so great to see Snow White in her castle in the fairy tale world and to see the reality Snow White as an elementary school teacher. The little details are what make this show so fun to watch.

Revenge, Wednesdays on ABC at 10 PM

This show is my guilty pleasure. It is soapy, but honestly so addicting. Amanda Clarke moves back to the Hamptons to seek revenge on all those that wrongfully accused her (late) father of being a terrorist. It is so entertaining to see her taking down her filthy rich neighbors, one by one, in such elaborate schemes. The best part is that no one knows she is Amanda Clarke or that she is the one reeking havoc. I fully cannot wait until both of those things are revealed, which according to sources should be this season. Although I have to wonder how the show will go on after the big reveal. I am looking forward to finding out!

What are your favorite shows from this year? I’d love to hear about them in the comments!